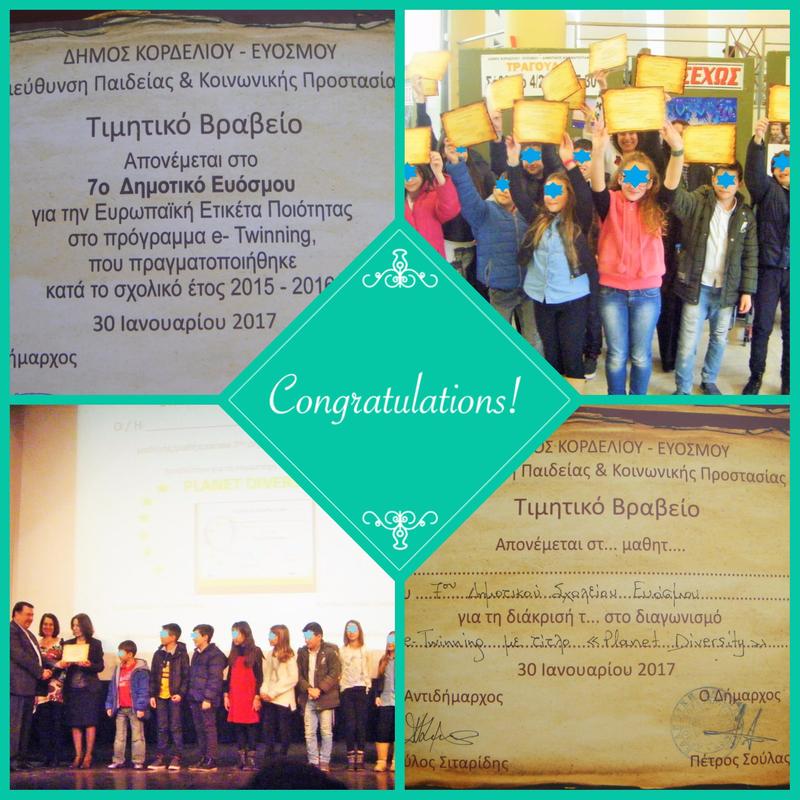 2nd of December 2016. Awards Ceremony at 7th Primary School of Evosmos.
The D1 pupils of the 7th Primary School of Evosmos, were so very happy to receive their European Quality Labels and National Quality Labels, in the Awards Ceremony at our school. It was a Great evening filled with enthusiasm, during a presentation full of great memories of our superb PLANET. Congratulations to all partners!

"Planet Diversity" at the 8th Conference on Informatics in Education
The article "Ο μικρός πρίγκιπας μεγάλωσε!" - "The little Prince grew!" (authors: M. Panoussiadou & S. Theodoridou) was reviewed by the Scientific Committee of the Conference and was presented on Saturday, 15/10/16. I want to thank all the participants for their positive feedback!
7th Evosmos - We were happy to present our Planet Diversity project to the One-Day meeting organized by the Physical Education Consultant of Thessaloniki, Mr. Oksizoglou 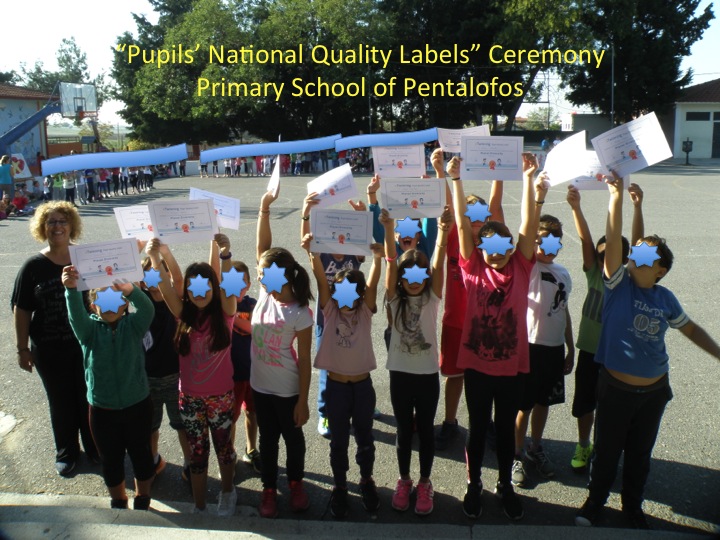 On Friday 10-6-2016, the D1 Active Team of the 7th Primary School of Evosmos greeted warmly the D1 Primary Class of Pentalofos  at their school! We played, had fun, we received hugs, smiles, treats and lots of love! We will never forget this day! Thank you partners and Mrs Sazaklidou!

LAST INTERSCHOOL EVENT- BEHIND THE SCENES
VIDEO WITH ENGLISH SUBS

7th Evosmos-We were happy to present our Planet Diversity project to the meeting organized by the Physical Education Consultant of Thessaloniki, Mr. Oksizoglou.

D1, Primary School of Pentalofos
On Tuesday, March 1, the distinguished children's books author, Vassiliki Nevrokopli, visited our school. She narrated her fairy tale "The Sunbeam Weaver" and then visited our school's library, discussed with pupils of classes A, B1, B2, D1 and D2 and received their handmade gifts. Then she came to our classroom. We discussed with her about our project Planet Diversity and she admired our Sun of Diversity. It was wonderful meeting her!
"The Sunbeam Weaver" - Kizoa Online Movie Maker
Miss Vasiliki Nevrokopli and “The Sunbeam Waver”
It was such an exciting day today! Miss Vasiliki Nevrokopli, the author of the Sunbeam Weaver, visited our school! D1 students along with all teachers were so happy to welcome her!
Miss Vasiliki is such a lively human being and has such a great contact with pupils! After a very vivid narration of her Sunbeam Weaver story, we shared opinions on so many issues that human beings wonder about. We talked about the importance of making mistakes in life, about our dreams that we long to come true, about inspiration, about the value of having some doubts - like the pilot of the story. Doubt led him not to trigger the bomb. Also, caring for others and being considerate of others is what makes Great people, like the pilot became a father of all children when he decided not to push the red button and spread happiness instead, with millions of painting falling from the shy. We discussed about the value of letting things happen for us, to go with the flow and not be very tense. Xaritonas became the Sunbeam Weaver not because he had this in mind, but because he observed closely what was happening and found the way to the pilots heart. Then as a domino, things started unfolding and happiness and light prevailed.
We also played with the colored cloth, made of dreams that cover the planet and added sunbeams to it, to be sent to our partner schools and to all parts of the world! Along with Miss Vasiliki, the Sunbeam from Pendalofos arrived that day! We were all so very excited! We all put hands on the envelope and read the message. “Always support and respect each other” What a great message! Thank you our friends.
Such a bright day we have shared! Thank you Miss Vasiliki Nevrokopli! You have set light on our spark and enlighten our way! Thank you pupils, you are all brilliant rays of light, our young Sunbeam Weavers!!!
"Astronomic" videoconference (Collaborative Article by pupils of  D1 Primary School of Pentalofos)

On 02/09/2016, the D1 class Primary School of Pentalofos participated in an “astronomic” videoconference. We talked with Mrs. Fiori - Anastasia Metallinou, who works at the National Observatory of Athens.
We talked about the constellations Orion and Scorpio. Mrs Metallinou narrated the myth of how they got their names.
She also talked about the "dwarf-planets" and the "red giants" that are stars, up to 1.000 times larger than the sun. We learned that shooting stars are meteoroids. When they come near the Earth, gravity pulls them down and they dissolve into the Earth's atmosphere.
We were impressed to hear that the colors we see in the sky and the moon may not be real. Depending on the particles in the atmosphere, some colors are absorbed.
We were thrilled learning about with the Antikythera Mechanism, which was the first computer. It was built in ancient Greece and it predicted the position of the sun, moon, possibly the planets, the sun and moon eclipses, phases of the moon and more.
We discussed about many more, since our "astronomical" videoconference lasted an hour! We would love to discuss with Mrs. Metallinou in person!
On Wednesday 3/2/2016, we visited A2 partner-class from 4h primary School of Oraiokastro. It was such a wonderful day, we played games proposed by our partners from the 7th Primary School of Evosmos and our class, we admired the Little Prince's corners in A2 classroom and in the end, we didn't want to leave! We hope to meet our other collaborators too!
Collaborators' meet- D1, Pentalofos & A2, 4th Primary School Oraiokastro - Kizoa Online Movie Maker
A video with clips from our wide series of video conferences on 18/12. We exchanged feedback, we shared ideas and we loved meeting each other! Thank you everyone, for making this an exceptional experience for all pupils - participants in our Planet Diversity !
Created with Padlet