​The pupils of D1 Primary School of Pentalofos wrote a story for a theatrical play. In collaboration with the D2 class of our school they created the dialogues through improvisation and brainstorming.  The result: the theatrical play "The little Prince after the snake bite" (in greek). It's a symbolic conversation between little Prince and his emotions. The story is about little Prince on a quest for his rose, after returning to his planet. The rose garden of Primary School of Pentalofos helps out little Prince on his quest. A special thank you to Maria Karapanagiotidou, D2 class teacher, for an excellent collaboration!
The play in English:
The little prince after the snakebite from mariapanous
The play in Greek:
Ο μικρός πρίγκιπας μετά το τσίμπημα του φιδιού. from mariapanous
On Monday, 13/6/2016, the D Primary Class of Pentalofos performed the theatrical play "The Little Prince after the snake bite", written by the pupils, for the school community. The performance had positive impact and we recieved great feedback from all pupils, parents, educators of our school.
Today the 1st Kindergarten of Pentalofos visited our class on the initiative of the Kindergarten teacher Asterios Farmakis. Young pupils presented themselves and we talked about their work & our work on emotions. We have prepared for them drawings of the short story "THe Island of Emotions" and they shared with us their thoughts on love and creating ties and friendships. Then a pupil of D1 presented a small part of our Project, the Land of Emotions. We received the best feedback! Thank you!
1st kindergarten and D1 Primary Class of Pentalofos - Kizoa Video Editor - Movie Maker
D1, Primary School of Pentalofos
Planet Diversity meets EU!
THE WISH OF PUPILS OF D1, PRIMARY SCHOOL OF PENTALOFOS FOR PLANET DIVERSITY AND THE WHOLE WORLD.
Our Team "Artists" decided to participate on a Radio spot and Song Contest (3rd Panhellenic School Radio Festival). They decided to write a song for war refugees and their journey away from the war, a subject that concerns all of us. They wrote the lyrics and created the melody. Then they asked a student of the 5fth Grade of our school to accompany them with the piano. She created the rhythmic part and the closure of the song. The song is performed by all students of D1 and the pupil of the 5th grade.
eTwinning "Planet Diversity" 2nd Thematic Unit "Creation of Planet Diversity" -Our collaborative activities & contribution to the 2nd part of the eTwinning project "Planet Diversity".
Created with Padlet

Team "Philosophers" - D1, Primary School of Pentalofos
Pyrghilalaia is a city on Planet Diversity. The pupils of D1 played with the syllables of the syllables of our partners cities (Pyrgos, Ghilarza, Astypalaia, Thessaloniki) and the name was created. This is a presentation of characteristics of our Planet, Pirghilalaia and story about the hero of a neighborhood in Pyrghilalaia.We hope you'll enjoy it! 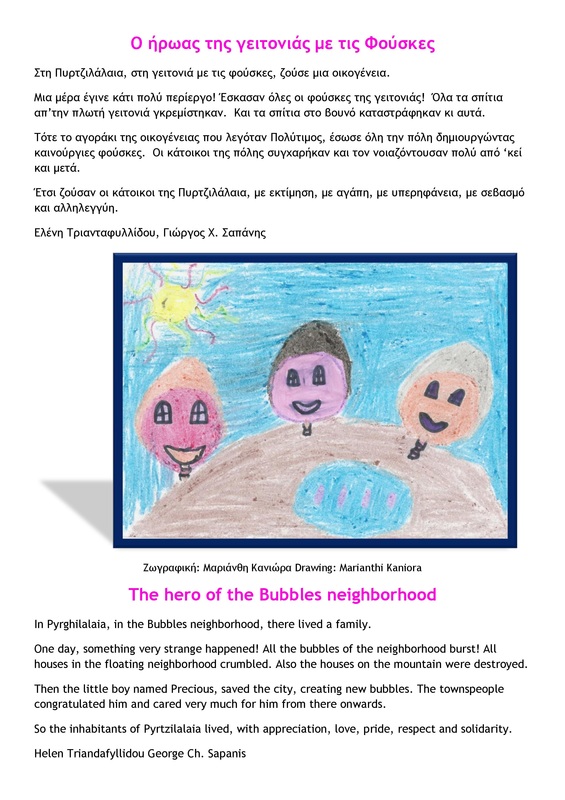 The Great Book of Trees and Plants​
Our Team "Astronomers " completed the constellations of Planet's Diversity sky and the stories behind their names .
Constellations on planet’s diversity sky from mariapanous
D1, Primary School of Pentalofos
We watched the film "The little Prince" and we loved it! Then D1 pupils completed a worksheet on the film, in groups . The following issuu includes the worksheets in greek, but also the questions and some indicative answers translated in English for our Italian friends!
Interschool Activity- D1, Primary School of Pentalofos
Planet Diversity meets Vincent Van Gogh.
This is a little hip-hop song created by the active team of D1 Primary Class of Pentalofos and the Physical education teacher Eleftheria Karagogou. The Planet of Dreams!
Thank you partners for all the wonderful sunbeams, messages and letters you have sent to us! Our Sun of Diversity is completed and sooo beautiful! 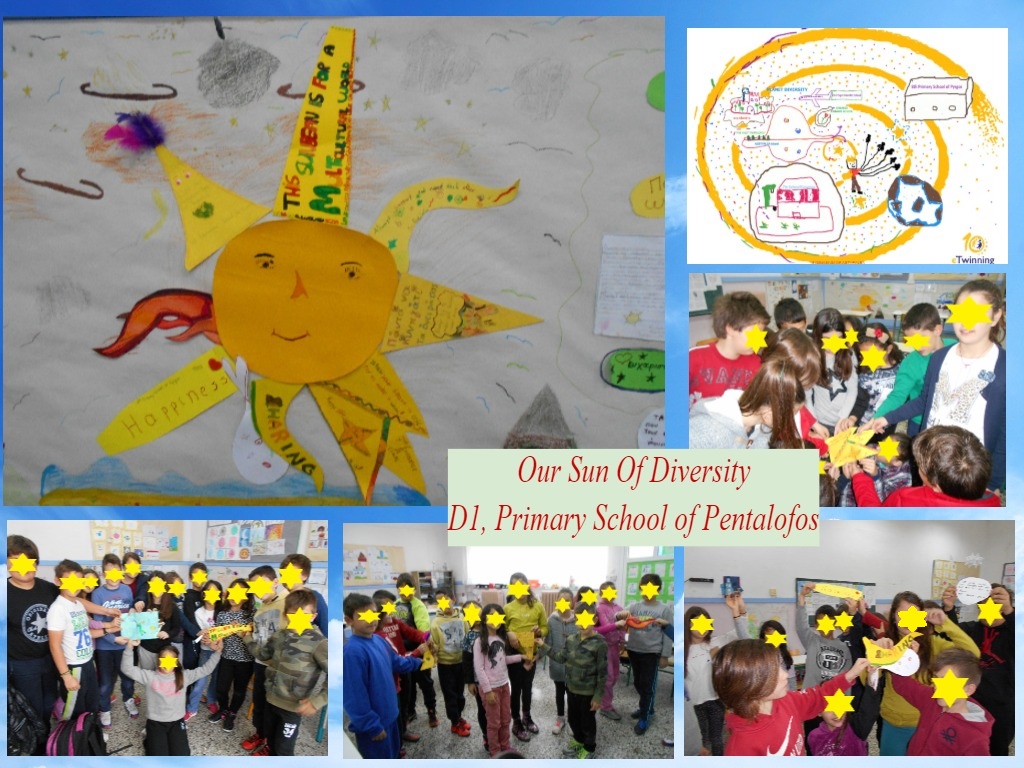 On Tuesday, March 1, the distinguished children's books author, Vassiliki Nevrokopli, visited our school. She narrated her fairy tale "The Sunbeam Weaver" and then visited our school's library, discussed with pupils of classes A, B1, B2, D1 and D2 and received their handmade gifts. Then she came to our classroom. We discussed with her about our project Planet Diversity and she admired our Sun of Diversity. It was wonderful meeting her!
"The Sunbeam Weaver" - Kizoa Online Movie Maker
This is D1 Primary School of Pentalofos-team "Geographers" contribution to our collaborative e-book for the topic area "Travelling with the little Prince".
Our Project's visitor and English teacher Mrs. Vasmatzi worked with the pupils of D1, Primary School of Pentalofos on a proposed activity by our partners from the 8th Primary School of
Pyrgos. A summary puzzle of the book "The Sunbeam Weaver" written by Vassiliki Nevrokopli.
"Astronomic" videoconference (Collaborative Article by pupils of  D1 Primary School of Pentalofos)

On 02/09/2016, the D1 class Primary School of Pentalofos participated in an “astronomic” videoconference. We talked with Mrs. Fiori - Anastasia Metallinou, who works at the National Observatory of Athens.
We talked about the constellations Orion and Scorpio. Mrs Metallinou narrated the myth of how they got their names.
She also talked about the "dwarf-planets" and the "red giants" that are stars, up to 1.000 times larger than the sun. We learned that shooting stars are meteoroids. When they come near the Earth, gravity pulls them down and they dissolve into the Earth's atmosphere.
We were impressed to hear that the colors we see in the sky and the moon may not be real. Depending on the particles in the atmosphere, some colors are absorbed.
We were thrilled learning about with the Antikythera Mechanism, which was the first computer. It was built in ancient Greece and it predicted the position of the sun, moon, possibly the planets, the sun and moon eclipses, phases of the moon and more.
We discussed about many more, since our "astronomical" videoconference lasted an hour! We would love to discuss with Mrs. Metallinou in person!
Dear partners,
this is D1 Primary School of Pentalofos-team "astronomers" contribution to our collaborative e-book for the topic area "Travelling with the little Prince". (english translation by the class teacher)
Team "philosophers" contribution to our collaborative e-book for the topic area "Travelling with the little Prince".(english translation by the class teacher)​
On Wednesday 3/2/2016, we visited A2 partner-class from 4h primary School of Oraiokastro. It was such a wonderful day, we played games proposed by our partners from the 7th Primary School of Evosmos and our class, we admired the Little Prince's corners in A2 classroom and in the end, we didn't want to leave! We hope to meet our other collaborators too!

E Primary Class, of Pentalofos, after watching our project's presentation, they created and offered to our Planet Diversity magnificent pieces of art, inspired by the little Prince! Thank you E Primary Class and class teacher miss Dereki!

Article written for our school's blog, by pupils of E' Primary Class of Pentalofos, after watching our Project's presentation.
"On Tuesday, January 26, 2016, D1 class visited our class and presented a project, eTwinning on the little Prince.
In this project many schools from Greece and abroad are participating. There upload school photos and theirs as videos and paintings.
They showed us their activities and other schools' activities too. Also they suggested that we create and offer some handicrafts on the little Prince to this project. This project we notably liked it and we were very impressed. The children have worked very well in this regard. We hope to continue and do even better !!!"

Active team Pentalofos. Game "The snake".
Dear partners, D1 Active team with the support of our visitor Eleftheria Karagogou created this game for our project. Have fun! 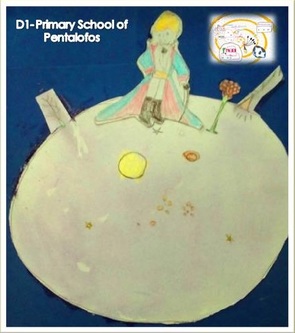 ​Our team "Astronomers" had an artistic moment! The result: a collage of the Little Prince's planet.
Collaborative activity- geographers and philosophers, D1 Primary School of Pentalofos.
Philosophers discovered a wide range of emotions in the story of the Little Prince. They noted them, they worked on them and collaborated with geographers to create The Land of Emotions.